Do not be afraid of pronouns! 🇬🇧 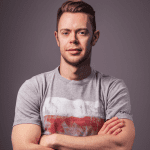 I’m sure you know personal pronouns in the nominative case –> ja, ty, on, ona…
All right, it’s easy. Have you ever thought about all other cases? No worries, it’s not that bad neither!

Except Narzędnik (mną) all other cases have the same form – mnie! It’s a great new, isn’t it? You just have to remember that Celownik has also a second form mi. In this case, use it only at the beginning of the sentence.

‘Ty’ have more forms. Note that this time, 3 grammar cases also have accented forms (at the beginning of the sentence). We also use these forms after the preposition, eg. Czekam na ciebie, dzwonię do ciebie.

They say that guys are more complicated. Hmm, it’s true in case of personal pronouns! Take a look at Biernik and Dopełniacz. There are both basic forms (go) and accented forms that we mostly use at the beginning of the sentence (jego). But! There is also another form (niego) that is used only after prepositions.
The good new is that Biernik and Dopełniacz share the same pronouns. You can say: „Kocham go” or „Nie kocham go”.

The forms of “ona” are much easier, because – fortunately – there are fewer of them. However, remember that here the Biernik and Dopełniacz have completely different personal pronouns.

„Ono” is for example: dziecko, but also: pytanie, samochód or okno. Don’t forget that in Polish a pronoun can also replace any object, so you can say: Mam pytanie or Mam je (pytanie = ono). Forms “ono” are identical with “on” (except Biernik!).

Personal pronouns „my” and „wy” are both very easy! Each of them has only one form! 👍

Do you remember that “oni” means a couple or a group of people with at least one man? Now remember these few forms for other cases. Note that Biernik and Dopełniacz again have the same forms. Cool, right?

And finally – “one”. This time you have to remember that the Biernik and Dopełniacz have different forms – just like “ona”.